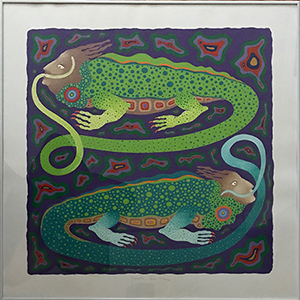 “HUMANIMAL” is a mixed-media exhibition of sculptures and paintings by Joseph Smith. His exhibition focuses on the relationship of humankind and animals, drawing parallels to the similarities in their characteristics. “Developing and expanding humankind is increasingly separating themselves from the animal world. Having spent many years rescuing injured wildlife, dogs from kill shelters and puppy mills, raising cattle and horses, and coming in close contact with many other species in what I call Animalia, I have been fortunate to have been able to notice that each and every animal I have ever touched has possessed its own distinct and unique personality apart from its species defined characteristics and instincts. My desire to acknowledge and learn more about personality as it related to species, I wondered about the possibilities of humans interacting to such a degree as to become a mindful part of the animal. Creating human figures with animal heads, more importantly minds, became further explored by forming human heads/minds on animal figures. If either of these were possible in the abstract sense and allowing the viewer to reflect on this concept, I believe a closer bond can be formed between humankind and the multitudes of animal species that have closely evolved together.” – Joseph Smith Smith resides in Lillian, Alabama by way of Oklahoma, California, Connecticut, and the South of France. He studied painting and sculpture at the California College of Art and received a Bachelor of Fine Arts degree from the Art Center College of Design. An experienced stone and wood carver, welder, ceramicist and stone fabricator his sculptures, drawings and paintings have been shown in galleries in New York, Washington DC, Massachusetts, Pennsylvania, Connecticut, California, Florida and New Mexico in the U.S. in Avignon, Les Baux de Provence, St. Remy de Provence, Remoulin and St. Sabastien in the South of France, Geneva and Zurich in Switzerland and Cologne, Germany. He has taught classes and workshops in sculpture techniques, drawing and painting. His works have been viewed in Art News, Art Forum, reviewed in The Washington Post and numerous local journals and newspapers in the U.S. as well as Southern France. He has won several awards for his work at juried exhibitions both here and in France. See Smith’s works throughout the month of March during our gallery hours, between 9 AM – 5 PM on weekdays. Meet the artists on ArtWalk night, March 9, between 6 – 9 PM.