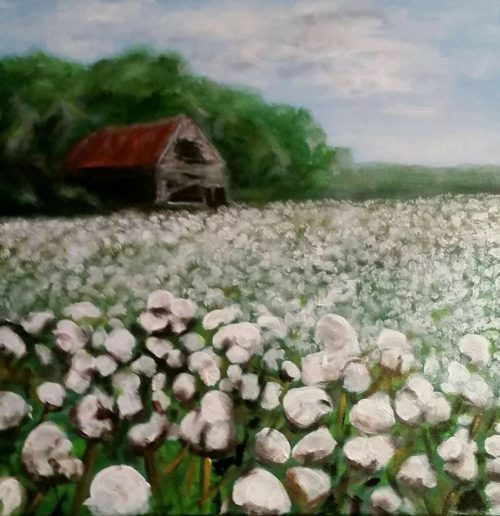 This January, the Small Room will feature “Downhome – A Portrait of the Small Southern Town”,  a new painting series by artist Hunter Cobb. Cobb says that the small Southern town has played an iconic role in American Culture. From “To Kill a Mockingbird” to “The Andy Griffith Show”, Southern towns have been cast as both sinister and idyllic. As always, the truth is somewhere in between. Having been a visitor and resident of many small towns over several decades, Cobb noticed certain similarities and patterns. “This exhibit is my attempt to distill these attributes into a gestalt that is The Small Southern Town.” Cobb’s childhood involved living in various locations in the U.S. and the world, as his father was a member of the Air Force.  He graduated high school in West Germany and attended the University of West Alabama. He moved to Mobile in 1992, and began a career in graphic design.  Several years ago he opted for a second career in software development.  He has been married to his wife and fellow artist for sixteen years.  Cobb has been an artist in residence at Innova Arts, Cathedral Square Gallery, Gallery 450, and Galeria Ltons in St. Augustine, Florida. He is a member of the Mobile Arts Council, Alabama Miniature Art Society, and is Second Vice President of Watercolor and Graphic Art Society. According to Cobb, “I enjoy creating works that evoke an emotional response in viewers.  Taking a moment in time and space and manipulating color and form conveys emotion, or I utilize symbolism to have an impact on the viewer.  Artists should not be limited to a certain style or technique so my works draw on both inner and outer visions and can range from realistic to semi-abstract.  These different methods allow me to convey different moods and ideas.”