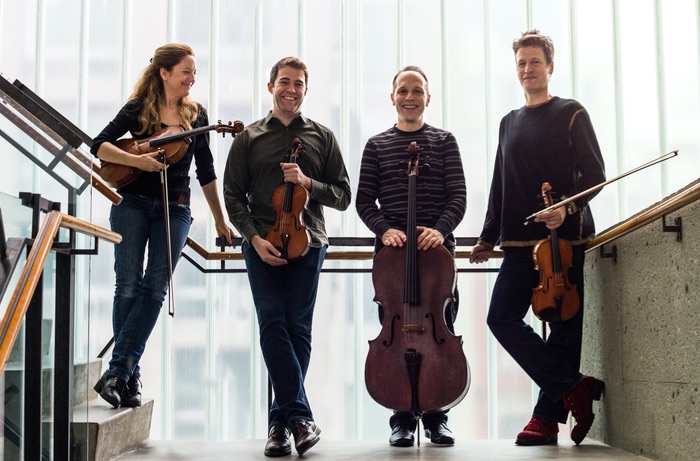 Mobile Chamber Music welcomes the exciting St. Lawrence String Quartet to the Laidlaw stage for our first concert of 2022.
SUNDAY, FEBRUARY 20, 2022 AT 3 PM
“Modern,” “dramatic,” “superb,” “wickedly attentive,” “with a hint of rock ‘n roll energy” are just a few ways critics describe the musical phenomenon that is the St Lawrence String Quartet. The SLSQ is renowned for the intensity of its performances, its breadth of repertoire, and its commitment to concert experiences that are at once intellectually exciting and emotionally alive.
Established in Toronto in 1989, the SLSQ quickly earned acclaim at top international chamber music competitions and was soon playing hundreds of concerts per year worldwide. It established an ongoing residency at Spoleto Festival USA, made prize-winning recordings for EMI of music by Schumann, Tchaikovsky, and Golijov, earning two Grammy nominations and a host of other prizes before being appointed ensemble-in-residence at Stanford University in 1998.

We expect a thrilling afternoon that should not be missed.
Masks will be required.
Ticket information and more
Posted in Music