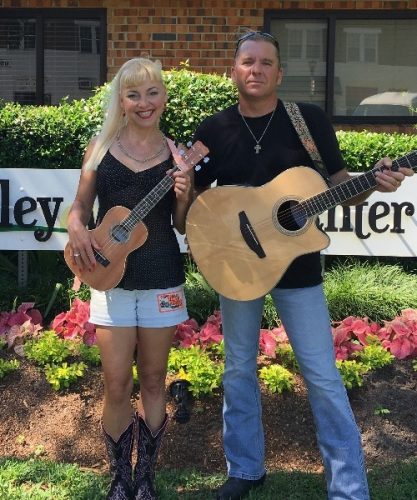 Join us for an early Sunday show and enjoy a music-filled afternoon with Wingbeat!
For more info. call 251-367-4599
Paula Ann and Dominic DeMonico are the husband and wife musical duo ‘”Wingbeat”. Hailing from Connecticut and inspired by Sugarcane Jane, they “spread their wings” and flew South two years ago to make their “new nest” in Foley, Alabama. Paula Ann’s professional performing arts education is in Dance, Music and Theatre. She has worked as a performer for over 35 years on stage, scene and television, as a voice actress for video games and animation and was even a stunt woman! Her love of music and songwriting began at an early age where she was hugely influenced by the Country music that she grew up on. Her storytelling lyrics are viseral, heartfelt and sometimes comedic.
Dominic is a seasoned musician having learned to play guitar and bass at the age of seven and began performing in bands at age 15 at has performed at the most prestigius nightclubs and music venues in the Northeast. He played guitar and bass with New England Hall Of Fame Drummer Bobby “T” Torello for many years and lastly with “The Name Droppers.”
He most recently performed live with Sugarcane Jane at Under The Oaks in Foley on drums, and here at The People’s Room playing acoustic guitar on their SOLD OUT show! As a songwriter, Dominic has a flair for writing great hook driven melodies.
Address:
78 Saint Francis St
Mobile, AL 36602
Posted in Performance