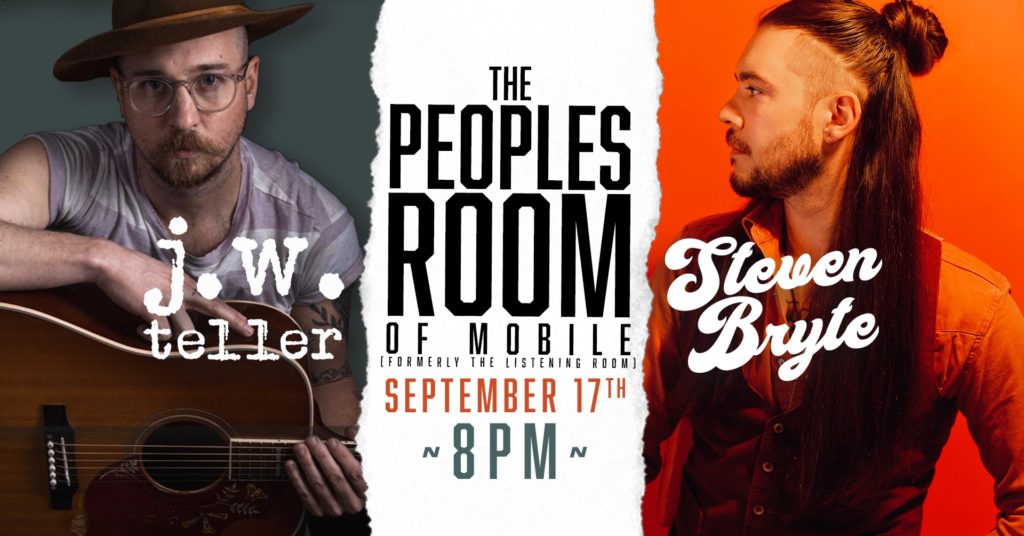 Tickets $20. Reservations 251-367-4599
An intimate night with two Southern(-ish) originals!
J.W. TELLER
With his self-titled debut album, J.W. Teller rung in the year right for folk listeners like us. Each song present on the LP serves the same function of illustrating a separate part in Teller’s life, the singer-songwriter recalling these moments with straight-shooting precision. A layman’s poet, Teller makes his mark with the frankness with which he conveys his autobiography. He’s an artist who fundamentally understands the essence of contemporary folk music without ever overdoing it, bearing his heart without making it trite. The art for his recent record includes a magnolia blossom on an armadillo, which seems like a fitting symbol for the emotional tensions in the songs. Songs of characters fleeing small towns, “driving hard on faith and gasoline.” Ghosts and the past haunt “mysterious nightfalls and swamp-covered lake beds.” He transmits the weariness and desperation with an unassuming drawl that lightly cracks on the higher notes.
Steven Bryte
With the release of his latest single ‘Whisper Valley,’ Steven Bryte, the singer of The Underhill Family Orchestra, is branching out in a whole new way. Fusing a soulful, powerful voice and a tailor-made approach to songwriting that is equal parts anthemic and pensive, he is paving his own way. Not unfamiliar but exiting and fresh, this Mobile, AL songwriter will have you laughing and crying, toe-tapping and two-stepping, hopeful and thoughtful. Having honed his craft across the continent to thousands of people for the last decade, he invites you to come in and be part of his family as he shows you around the living room of his heart, mind and curious soul.
Posted in Music