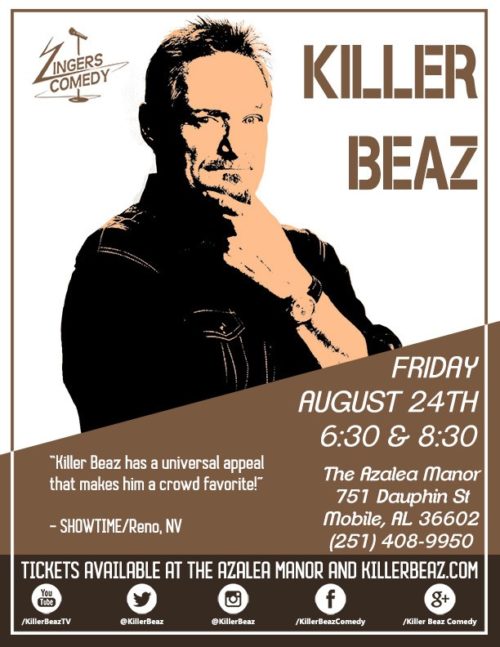 Performing his last shows in Mobile this year, Killer Beaz, comedian and moonshiner extraordinaire, returns to Mobile fresh from filming the new season of Discovery Channel’s Moonshiners and his own “Killer Beaz PRESENTS” Series in Nashville, TN for The Comedy Buzz. Beaz will be performing Friday, Aug 24th at the Azalea Manor. Beaz has his own brand of hard hitting, “Laugh out Loud” – “Laugh A Lot” comedy. When asked, Beaz says about his shows, “I love the art of stand up comedy, the performance, the snorts, giggles and convulsive laughter in unison. I love having an effect on the room, and the seeing joyous anticipation as audience members that can’t wait to hear what is next! There is such delight in that!”
Killer Beaz is currently touring the country, performing on the high seas, starring in his third season of “Moonshiners” on Discovery Channel, and about to release an upcoming video, “So…There’s That!”, and launching TheComedyBuzz.com with his new partners from Music Row in Nashville, having just recorded the first episodes of “The Killer Beaz PRESENTS” Series to be released this fall. TheComedyBuzz.com is a new multi-media comedy network, which will feature a 24/7 Comedy Radio Network, and also be a sales outlet for comedy. It will feature live productions, podcasts, interviews, and all things funny in the stand up comedy industry.

With many thousands of radio, television and stage appearances, Beaz has been entertaining audiences for over three decades. He has received reviews such as:

“Killer Beaz lives up to his name, “Killing” his audience, night after night, show after show!”
– Entertainment Today/Las Vegas, NV
“Beaz is ‘Killer!’” – Rolling Stone Magazine
Beaz delivers a high-energy, edgy, and “everyman” style humor that appeals to any audience. See him on television, hear him on the radio, see his stage performance live…you’ll be “Stung for Life!” The shows are Aug 24th at 6:30 & 8:30 PM. Tickets can be purchased at ZingersComedycom or KillerBeaz.com.